A three-judge panel of the Colorado Court of Appeals ruled unanimously, on May 10th, that Day of Prayer proclamations by the Governor are unconstitutional. The court didn’t address the National Day of Prayer but the reasoning can be applied to that law: “A reasonable observer would conclude that these proclamations send the message that those who pray are favored members of Colorado’s political community, and that those who do not pray do not enjoy that favored status.”
END_OF_DOCUMENT_TOKEN_TO_BE_REPLACED

It’s really hard for some religious believers to understand why the separation of church and state is really important. In an effort to advance the cause in support of strong separation I have come up with a good analogy to explain it. I call it “The Sports Analogy”.
END_OF_DOCUMENT_TOKEN_TO_BE_REPLACED

May 7th was the so-called National Day of Prayer. It is an ad hoc “day” sponsored by the religious right front group Focus on the Family to misinform us all about the erroneous claims that fundamentalist Christians are being persecuted in the United States. President Bush made a public spectacle of the “event” but President Obama only continued the proclamation part. That is a good sign, but there are other reasons to drop the National Day of Prayer.

Americans United for Separation of Church and State have several reasons posted on their website including:

Americans don’t need the government to tell them when or how to pray.

Americans have the right to pray for whomever they want and in what manner they like. But we don’t need an officially designated government proclamation to do that. Our people are free to engage in worship whenever they want. Allowing government to set aside certain days for prayer and worship implies that the state has some say over our religious lives when it does not. It is simply not the business of government to advise when, if and how people pray.

Denying a request for a religious proclamation, Thomas Jefferson wrote:

“I consider the government of the US. as interdicted by the Constitution from intermeddling with religious institutions, their doctrines, discipline, or exercises.…. I do not believe it is for the interest of religion to invite the civil magistrate to direct its exercises, its discipline, or its doctrines; nor of the religious societies that the general government should be invested with the power of effecting any uniformity of time or matter among them. Fasting & prayer are religious exercises. The enjoining them an act of discipline. Every religious society has a right to determine for itself the times for these exercises, & the objects proper for them, according to their own particular tenets; and this right can never be safer than in their own hands, where the constitution has deposited it….[E]very one must act according to the dictates of his own reason, & mine tells me that civil powers alone have been given to the President of the US. and no authority to direct the religious exercises of his constituents.”

Finally, this video from comedian Lewis Black, while a bit dated, expresses why I don’t like my elected officials to hold their religions on their sleeves:

Lewis Black on Politics and Religion

Just saw this on the intertubes…. more on this in coming days — dlb

MADISON, Wis. (AP) — The nation’s largest group of atheists and agnostics is suing President Bush, the governor of Wisconsin and other officials over the federal law designating a National Day of Prayer.

The day of prayer, held each year on the first Thursday of May, creates a “hostile environment for nonbelievers, who are made to feel as if they are political outsiders,” the lawsuit said.

The national proclamation issued this year asked God’s blessings on our country and called for Americans to observe the day with appropriate programs, ceremonies and activities.

Wisconsin Gov. Jim Doyle is named in the suit because he is one of 50 governors who issued proclamations calling for the prayer day. The foundation is based in Madison.

The foundation has filed numerous lawsuits in recent years, including one rejected by the U.S. Supreme Court last year that attacked President Bush’s faith-based initiative.

Doyle spokesman Lee Sensenbrenner had no comment on the lawsuit. Messages seeking comment from the task force and the White House were not returned Friday.

My friend Dan Birtcher, who organized a protest of the so-called National Day of Prayer, reports that the protest went well and no one was arrested.

Today’s rally at the Statehouse was a great success!

About 10 HCCO and SFF members carried signs and handed out literature from 11am until about 2pm. Because those assembled for the prayer event were seated facing towards the street I believe everyone there (including Mr. Blackwell) got to enjoy our signs during most of the proceedings. I think we did a very good job getting our message across to them without in any way being disruptive.

I had lots of interesting conversations while I was down there – many with supporters who were VERY glad to see us promoting a secular worldview. I also had some cordial discussions with Christians and other believers in prayer. No matter how severe our disagreements may have been, I think I was able to make all my points with a smile – and I’m pretty sure I managed to end every encounter with a handshake. My suspicion is that it will be far harder for the people I talked to to think of atheists and humanists as demons with tails and horns in the future. 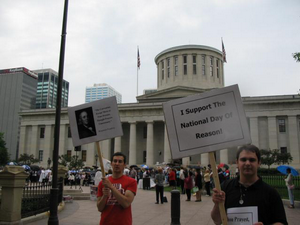 HCCO is the Humanist Community of Central Ohio and SFF stands for the Students for Freethought, a student group at Ohio State. The protest also included members from Capital University also in Columbus. “Mr. Blackwell” is J. Kenneth Blackwell, the freshly minted GOP nominee for Ohio Governor who has not been shy to put his religion on his sleeve.

August Brunsman, executive director of the Student Secular Alliance, took some photos of the protest.

Dan also noted that a reporter from the NY Times interview a couple of the protesters so there might be a mention in the Times.