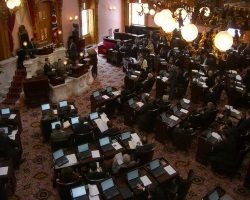 Ohio House of Represenatives in session. Photo by Joshua Rothaas Used with permission.

In Ohio, Substitute HB 425, also known as the Ohio Student Religious Liberties Act seems to codify rights in state law that public school students currently enjoy from the 1st amendment of the US Constitution and that have been affirmed through various court cases over the years. Why would a GOP majority seem to want to protect religious freedom for students? To give cover to discriminate and bully LGBT students of course.

A majority of the HB 425 just rehashes current legal precedents covering religious freedom in the public schools. As the Columbus Dispatch put it:

Lobby Day At The State House

On February 10th I attended Secular Summit 4.0 at the Ohio State House in Columbus. It was hosted by CFI NE Ohio. It was the second lobby day I attended and this time I tried to as prepared as I could be to speak to my representatives. Secular people need to do more in person lobbying of our elected officials in addition to phone calls, written messages, and blog posts.

The Secular Summit is a chance for secular people around Ohio to get together for a morning meeting then in the afternoon we have appointments with our state representatives and senators.

Ohio House Speaker Cliff Rosenberger (R) cut off the opening prayer, in the Ohio House of Representatives, Tuesday, after it went past 5 minutes in length. In reviewing the rules for a prayer opening the legislature, it’s clear the prayer should have been stopped much sooner for violating court advised guidelines and not just for length.

Using Hobby Lobby To Get US Motto Off The Currency

Michael Newdow has a history of lawsuits to support church and state separation. After addressing the phrase ‘Under God’ in the Pledge of Allegiance, Newdow recently filed a lawsuit, in Ohio, to have the US Motto ‘In God We Trust’ removed from our currency. The difference this time is he plans on using the same argument Hobby Lobby used to get out of the contraceptive mandate of the Affordable Care Act. Newdow’s strategy is very interesting and looks promising.

In previous cases against the ‘Under God’ phrase and the US motto he has argued about it being a harm to non-believers to be exposed to the obviously religious phrases.

How About We Put Kids First For A Change

Ohio is one of 47 states to have a religious and reasons of conscience exemption to mandatory child immunization. It is those exemptions that led to outbreaks like the measles outbreak last year that reached 21 states including Ohio. The Secular Coalition for America is starting a new campaign to ‘Put Kids First’ by asking state legislatures to repeal non-medical exemptions to immunizations.

First Amendment Overkill Or When Politicians Don’t Know The Law

Soon after the US Supreme Court ruled that LGBT couples could be legally married in all 50 states, many political and religious conservatives lost their minds. Some politicians, like Ohio Rep. Nino Vitale (R-Urbana) either don’t understand civil rights or they just really hate not being able to be bigots. Vitale wants to pass a law that will protect pastors from having to perform same-sex weddings which is already covered under the 1st amendment.