Governor Kasich Believes Government Should Be In Christian Propaganda Business 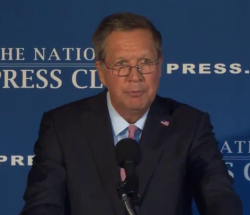 Ohio Governor John Kasich, who is trying to run for President, gave a so-called national security strategy speech at The National Press Club on November 17th. What is Kasich’s strategy? Christian propaganda into non-Christian areas of the world. To Ohioans like me, this is classic Kasich – pandering to religious conservatives rather than offering sensible, rational, and secular policies to solve problems.

The new agency, which he hasn’t yet named, would promote a Jewish- and Christian-based belief system to four regions of the world: China, Iran, Russia and the Middle East.

“We need to beam messages around the world” about the freedoms Americans enjoy, Kasich said in an interview with NBC News Tuesday. “It means freedom, it means opportunity, it means respect for women, it means freedom to gather, it means so many things.”

Other parts of his plan include invoking a NATO clause that would require all countries in the alliance to come to France’s defense, intensifying international intelligence cooperation, providing support for the Kurds in Iraq and Syria and creating no-fly-zone safe havens.

He would consolidate U.S. public diplomacy and international broadcasting efforts into a new agency with a “clear mandate to promote…Judeo-Christian Western values.”

“The fight against ISIS in Syria and Iraq is a symptom of a broader weakness in America’s national security policy: failing to advance our values in the battle of ideas,” Kasich said. “Not doing so against a threat such as ISIS or in places such as Syria and Iraq is interpreted by other opponents around the world as weakness. And weakness invites challenge and attacks of the kind that we have seen from nations that do not share our values, such as China and Russia.”

His remark about respect for women is laughable coming from the Governor who never saw an abortion restriction he didn’t like. It is like conservative Muslims saying they are trying to respect women by forcing them to dress in a Burqa and having no other personal rights.

A beltway pundit tried to spin Kasich’s remarks as a vestige of the Cold War way of thinking:

Interestingly, the phrase “Judeo-Christian values” itself also came to prominence during the Cold War, partly as a contrast to the atheistic policies of the Soviet Union. Google’s index of text in books shows that it only emerged in common usage after the end of World War II.

Kasich — of the generation that grew up during the Cold War — used a Cold War phrase to describe a Cold War idea. And assuming he doesn’t get elected and start a radio station telling people to read the Bible or the Torah, there’s nothing wrong with that.

I wouldn’t say there is nothing wrong with what he said.

Kaisch has tried to make the current conflict into a Jewish-Christian vs Islam battle. It’s more a vestige of the Crusades rather than the Cold War.

This country, who Kasich claims is for freedom, put God on the money, on our pledge of allegiance, and on the national motto in order to claim we were better than communists. It took 30 more years of sensible, rational, and secular policies to “defeat” communism. War didn’t do it and cheerleading for Christianity sure didn’t do it.

The Governor, who is well known for putting his foot in his mouth, is now walking back his call for religious cheerleading by the government:

One day after urging the creation of a federal agency to promote “core Judeo-Christian, Western values,” Republican presidential candidate John Kasich said on Wednesday he instead would upgrade the existing Voice of America to “engage in the war of ideas” against Islamic State.

Critics complained that Kasich wanted to increase the size of the federal government with a new agency and that he wanted the U.S. government to promote religious values.

“I don’t think we should be promoting Judeo-Christian values in the Arab world,” one of Kasich’s GOP rivals, South Carolina Sen. Lindsey Graham, told Real Clear Politics. “I think that was the Crusades.”

But Kasich said Wednesday, “We represent the Western ethic, Western values … We’re talking fundamentally about freedom of speech, freedom of the press, freedom of religion, the ability to gather to address our grievances, the equality of women.”

Who knew that Sen. Lindsey Graham would get the problem?

Founder, editor and host of Secular Left - please be gentle