‘President’ Trump spoke at the ‘Value Voters’ Summit, which is sponsored by anti-LGBTQ hate group the Family Research Council, and promptly offered them some red meat to bolster his own ego and failing administration. What better way to distract from failure than scapegoating other people.

A stone marker has sat on the grounds of the Lucas County Courthouse in Toledo, Ohio for the past 60 years. It’s engraved with the 10 Commandments – a set of Christian religious rules. Supporters of the monument claim the commandments are part of our collective legal history so it should remain on the courthouse lawn. In 2006, a federal court agreed. A reasonable person, looking at the full background of how the monument came to be would come to a different conclusion.

The Lucas County Courthouse is located on Adams Street in downtown Toledo. There aren’t many monuments or markers on the grounds but one that caught my eye is a 10 Commandments monument that was donated by a local chapter of the Fraternal Order of Eagles in 1957. The Eagles placed hundreds of markers across the country starting in the late 1940s through the early 1960s. The markers were placed on courthouses, public schools, and public parks.

Secular Left And Radical Islam Are The Same?

Dr. Paul de Vries, a columnist at The Christian Post, tries to make an argument that the Secular Left and Radical Islam have the same aims even if they go about it in different ways. He poses the question, ‘What could these two divergent groups have in common that enables their frequent, seeming public harmony?’. Although de Vries tries to compare the two he can’t help but offer a false equivalence and looking at his points leads to a different conclusion.

de Vries starts off his Op-Ed by trying to say that Kathy Griffin’s photo holding a bloody head “in ISIS style solemnity” is similar to the efforts to build a mosque in lower Manhattan which was labeled a “victory mosque” at Ground Zero by opponents.

White Evangelicals Gave Us Trump Because They Are Afraid Of Equality

A recent post-election poll showed that white evangelical Christians are way outside the views of a majority of Americans on a lot of issues. For people interested in keeping the church and state separate, it really isn’t a surprise. How far white evangelicals are outside the majority points to one tough obstacle seculars face – white evangelicals confuse the loss of cultural dominance with oppression. Demanding a level playing field doesn’t take away from people who already have the privilege of sitting at the table. 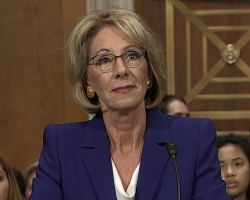 The Washington Post reported on a ‘secret’ conservative think-tank that has for years wanted to eliminate the US Department of Education and force the Christian religion into the public schools. The report uncovered by the Post and the fact that many members of the group are involved in the present Trump administration should give us supporters of secular education some pause.

It doesn’t take much research or ‘soul searching’ to know that any Supreme Court nominee by President Trump would NOT be friendly to issues of concern to secular people. You don’t even need to do any Internet searching because the major freethought groups already have the goods on Neil Gorsuch. Obviously, any ‘little Scalia’ is no friend of ours.