The Washington Post reported on a ‘secret’ conservative think-tank that has for years wanted to eliminate the US Department of Education and force the Christian religion into the public schools. The report uncovered by the Post and the fact that many members of the group are involved in the present Trump administration should give us supporters of secular education some pause.

A Presidential Candidate Panders To The Religious Using The Johnson Amendment

President Lyndon B. Johnson in the 1950s as a US Senator

Every election cycle, Secular Americans have to endure slimy pandering to the religious right by candidates looking to get elected to office. Some on the right of the political spectrum want to see the Johnson Amendment repealed so that churches are free to be involved in politics as much as they want. As it stands now, promises for repealing the law is pandering because it is hardly enforced and it can’t get a repeal vote now in a Congress with a Republican majority.

The Johnson Amendment refers to a change in the US Tax code passed in 1954. It was introduced by then Senator Lyndon B. Johnson and some have said he did it to silence some opponents to his reelection to the Senate.

Obvious violations of the first amendment in public schools can include a sign with an obvious religious message, a teacher proselytizing, or a school promoted event sponsored by a religious group that includes a sermon or prayer. There are, however, many smaller violations going on all the time that might be harder to see or stop. It takes all of us, checking into our local schools, to police these minor violations and to educate people about the 1st amendment.

Zack Kopplin wrote in ThinkProgress about the efforts of Focus on the Family to infiltrate public schools under the radar: 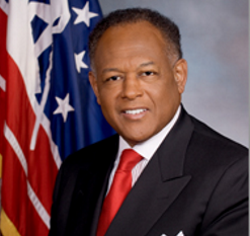 Richmond, Virginia Mayor Dwight C. Jones has a problem. According to news reports, it seems that work done for the church he heads was done by vendors and contractors that also do business for the city and it looks like at least one city employee used city time and e-mail to oversee construction at the church on behalf of the Mayor. The appearance of irregularity is something that needs to be investigated but the Mayor believes the scrutiny is a violation of the separation of church and state. You can’t use the 1st amendment to block an ethics investigation.

Ohio House Speaker Cliff Rosenberger (R) cut off the opening prayer, in the Ohio House of Representatives, Tuesday, after it went past 5 minutes in length. In reviewing the rules for a prayer opening the legislature, it’s clear the prayer should have been stopped much sooner for violating court advised guidelines and not just for length.

Using Hobby Lobby To Get US Motto Off The Currency

Michael Newdow has a history of lawsuits to support church and state separation. After addressing the phrase ‘Under God’ in the Pledge of Allegiance, Newdow recently filed a lawsuit, in Ohio, to have the US Motto ‘In God We Trust’ removed from our currency. The difference this time is he plans on using the same argument Hobby Lobby used to get out of the contraceptive mandate of the Affordable Care Act. Newdow’s strategy is very interesting and looks promising.

In previous cases against the ‘Under God’ phrase and the US motto he has argued about it being a harm to non-believers to be exposed to the obviously religious phrases.