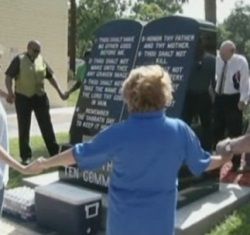 Usually American Atheists files a lawsuit to have a religious symbol removed from government property. But in a historical first, the resolution of a 1st Amendment lawsuit will include the erection of a monument celebrating atheism on the lawn of a court house in Florida. If a public space is really going to be open to all points of view then the atheist monument should appear along side other monuments and symbols for the religions.

A Religious Downside To Citizens United

Citizens United was a US Supreme Court decision in 2010 that said corporations had free speech rights like individuals. On Friday, 12/28, judges on the United States Court of Appeals for the Seventh Circuit ruled that corporations, citing Citizens United, could have religious freedom rights like an individual. If the ruling stands or in the future the US Supreme Court agrees, then a Pandora’s box will be opened where businesses could be allowed to discriminate based on religious beliefs.