Over the weekend I caught an article on the Washington Post website titled “Why do Americans still dislike atheists?” which made the case AGAIN that discrimination of atheists is wrong. What was more interesting was that some of the comments to the post proved the point.

The article by Gregory Paul and Phil Zuckerman included tid bits like this:

A growing body of social science research reveals that atheists, and non-religious people in general, are far from the unsavory beings many assume them to be. On basic questions of morality and human decency — issues such as governmental use of torture, the death penalty, punitive hitting of children, racism, sexism, homophobia, anti-Semitism, environmental degradation or human rights — the irreligious tend to be more ethical than their religious peers, particularly compared with those who describe themselves as very religious.

Nontheism isn’t all balloons and ice cream. Some studies suggest that suicide rates are higher among the non-religious. But surveys indicating that religious Americans are better off can be misleading because they include among the non-religious fence-sitters who are as likely to believe in God, whereas atheists who are more convinced are doing about as well as devout believers. On numerous respected measures of societal success — rates of poverty, teenage pregnancy, abortion, sexually transmitted diseases, obesity, drug use and crime, as well as economics — high levels of secularity are consistently correlated with positive outcomes in first-world nations. None of the secular advanced democracies suffers from the combined social ills seen here in Christian America.

Why do Americans still dislike atheists?

The story isn’t new but being on the Washington Post website gives it some status than if it appeared on an non-theist blog like this one. There is a question about the claim the authors make that 60 million people “are not believers”. Friends of mine in the secular movement would love to see that evidence. The number we agree on is closer to 12% of the population not the 1/5th cited by the article. Of that 12%, 2.3% were atheists, 4.3% are “Huxlian agnostics”, and 5.7% were wishy-washy agnostic.

What was more interesting for me were that some of the comments to the story seemed to prove the point – that atheists are still disliked.

Americans don’t, for the most part, generally dislike atheists. It is more that, much as many people dislike religious believers who are very pushy and proselytize them in an intrusive, in your face manner, they equally dislike atheists who are very pushy and who proselytize on behalf of atheism’s beliefs in an intrusive, in your face manner. Religious believers and atheists who quietly hold their beliefs and teach them to their children at home, and who respect others’ rights to believe and teach to their own children at home what they wish even when it is different from them as religious believers or as atheists, are not any more disliked by the American people than anyone else is. In short, the American people expect both religious believers of all stripes and atheists to be tolerant and respectful of others’ views and lives. And they dislike those from both groups who are not

This is common. As long as we shut up and don’t draw attention then people like us. I only wish Christians and other strident religious people would do that then I might like them.

The author seems to be making a common mistake: atheism and nontheism are not interchangeable. As a nontheist/agnostic, I see atheism as requiring as great a leap of faith as any belief in God. Perhaps it is the scientist in me that wants proof before I commit. In this case, I am comfortable with admitting I don’t know. I don’t understand, but can accept that others think they do. And if you want to proselytize, be advised it will be an exercise in frustration on your part and a source of amusement to me

Here the reader makes the common mistake that atheism is a religion requiring faith when it is in fact the believer who needs faith to believe since they have no rational evidence that a god exists. The atheist simply doesn’t believe in any god.

The United States has the largest prison population in the entire world. It has absolutely nothing to do with religion. It has much more to do with Obama’s WAR on drugs – not his war on religion.

This comment shows the reader has no sense of history. Quakers and Catholics came to this country due to persecution elsewhere and both supported separation of church and state. The Quakers did as a matter of conscious and Catholics did because protestants ran all the government agencies. Check out this article about the Philadelphia Bible Riots in 1844:

As my colleague Rob Boston noted in a Liberty magazine article, the city’s public schools were Protestant-dominated and featured recitation of (the Protestant version of) the Lord’s Prayer, readings from the (Protestant) King James Version of the Bible, and singing of (Protestant) hymns. When Catholic Bishop Francis Patrick Kenrick objected, the school agreed to excuse Catholic students from the exercises.

Protestant extremists were outraged at this nod toward diversity, and full-scale Protestant-Catholic riots erupted. Many city residents were injured and killed, and houses and church buildings were burned. The militia had to be called in to restore order.

What Philadelphia Shouldn’t Forget: The City Of Brotherly Love Rioted Over Religion In Public Schools

Sounds like something that would happen on the streets of Saudi Arabia today.

Hatred is born from ignorance. We need more education to show that atheists are people too and maybe soon, we will be less disliked.

In a stunning decision, the Canadian Social Sciences and Humanities Research Council, which funds social science research in Canada, turned down a grant request from Professor Brian Alters on the grounds that he’d failed to provide the panel with ample evidence that Charles Darwin’s theory of evolution is correct.

In its decision to deny the grant, the SSHRC panel said Alters had not supplied “adequate justification for the assumption in the proposal that the theory of evolution, and not intelligent design theory, was correct.”

Alters said he read the letter at a public lecture last week in Montreal and there were “audible gasps” from the large audience.

“Evolution is not an assumption and intelligent design is pseudo-science,” Alters said.

Janet Halliwell, the SSHRC’s executive vice-president and a chemist by training, acknowledged that the “framing” of the committee’s comments to Alters left the letter “open to misinterpretation.”

Halliwell said confidentiality obligations made it difficult for her to discuss Alters’s case in detail, but she argued that the professor had taken one line in the letter “out of context” and the rejection of his application should not indicate that SSHRC was expressing “doubts about the theory of evolution.”

However, Halliwell added there are phenomena that “may not be easily explained by current theories of evolution” and that the scientific world’s understanding of life “is not static. There’s an evolution in the theory of evolution.”

And in a strange twist, Professor Brian Alters holds teaching positions at McGill and Harvard University, wrote Defending Evolution, AND was a key witness defending Evolution in the Dover, PA trial last year.

When I visited the article on the Montreal Gazette site to get the quotes used in the post, I found the following block of ads below the article: 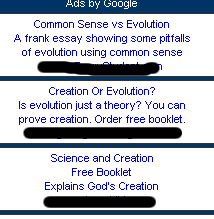 How ironic that the ads presented are ones against Evolution – the topic of the article. BTW, I blacked out the addresses because I refuse to give them free business. If you want the links in the ads then go to the article webspage.