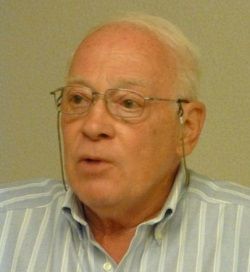 Ellery Schempp – His protest of required Bible reading in his High School lead to the case Abington School District v. Schempp being decided in 1963

On June 17th 1963, the US Supreme Court handed down its landmark decision that supported the separation of church and state in public schools – Abington School District v. Schempp. Even 50 years after the decision, we seem to have to fight the same battle over and over again. That is what happens in the struggle for civil rights. You have to be vigilant or they can be taken away. We need to celebrate dissenters like Schempp and we all need to try and emulate his activism.

Pennsylvania law required that “At least ten verses from the Holy Bible shall be read, without comment, at the opening of each public school on each school day. Any child shall be excused from such Bible reading, or attending such Bible reading, upon the written request of his parent or guardian.” In 1956, Ellery Schempp, a student at Abington High School, brought a Qur’an to homeroom and read from it as a protest against the policy and the related practice of reciting the Lord’s Prayer. He was sent to the principal’s office and, with the assistance of his parents and the ACLU, sued the school. The case made its way to the U.S. Supreme Court, where it was decided in his favor five years after Schempp’s high school graduation.

The case was decided not on the basis of the school district establishing a religion but on an infringement of the Schemmp family’s religious liberty.

The conclusion follows that in both cases the laws require religious exercises and such exercises are being conducted in direct violation of the rights of the appellees and petitioners. 9 Nor are these required exercises mitigated by the fact that individual students may absent [374 U.S. 203, 225] themselves upon parental request, for that fact furnishes no defense to a claim of unconstitutionality under the Establishment Clause. See Engel v. Vitale, supra, at 430. Further, it is no defense to urge that the religious practices here may be relatively minor encroachments on the First Amendment. The breach of neutrality that is today a trickling stream may all too soon become a raging torrent and, in the words of Madison, “it is proper to take alarm at the first experiment on our liberties.” Memorial and Remonstrance Against Religious Assessments, quoted in Everson, supra, at 65.

It is insisted that unless these religious exercises are permitted a “religion of secularism” is established in the schools. We agree of course that the State may not establish a “religion of secularism” in the sense of affirmatively opposing or showing hostility to religion, thus “preferring those who believe in no religion over those who do believe.” Zorach v. Clauson, supra, at 314. We do not agree, however, that this decision in any sense has that effect. In addition, it might well be said that one’s education is not complete without a study of comparative religion or the history of religion and its relationship to the advancement of civilization. It certainly may be said that the Bible is worthy of study for its literary and historic qualities. Nothing we have said here indicates that such study of the Bible or of religion, when presented objectively as part of a secular program of education, may not be effected consistently with the First Amendment. But the exercises here do not fall into those categories. They are religious exercises, required by the States in violation of the command of the First Amendment that the Government maintain strict neutrality, neither aiding nor opposing religion.

Finally, we cannot accept that the concept of neutrality, which does not permit a State to require a religious exercise even with the consent of the majority of those [374 U.S. 203, 226] affected, collides with the majority’s right to free exercise of religion. 10 While the Free Exercise Clause clearly prohibits the use of state action to deny the rights of free exercise to anyone, it has never meant that a majority could use the machinery of the State to practice its beliefs. Such a contention was effectively answered by Mr. Justice Jackson for the Court in West Virginia Board of Education v. Barnette, 319 U.S. 624, 638 (1943):

“The very purpose of a Bill of Rights was to withdraw certain subjects from the vicissitudes of political controversy, to place them beyond the reach of majorities and officials and to establish them as legal principles to be applied by the courts. One’s right to . . . freedom of worship . . . and other fundamental rights may not be submitted to vote; they depend on the outcome of no elections.”

The place of religion in our society is an exalted one, achieved through a long tradition of reliance on the home, the church and the inviolable citadel of the individual heart and mind. We have come to recognize through bitter experience that it is not within the power of government to invade that citadel, whether its purpose or effect be to aid or oppose, to advance or retard. In the relationship between man and religion, the State is firmly committed to a position of neutrality. Though the application of that rule requires interpretation of a delicate sort, the rule itself is clearly and concisely stated in the words of the First Amendment. Applying that rule to the facts of these cases, we affirm the judgment in No. 142. [374 U.S. 203, 227] In No. 119, the judgment is reversed and the cause remanded to the Maryland Court of Appeals for further proceedings consistent with this opinion.

Justice William J. Brennan made some excellent points in his concurrence such as pointing out having Bible readings or prayers in public schools diminishes the education choices of parents. He also wrote:

Thus a great deal of controversy over religion in the public schools had preceded the debate over the Blaine Amendment, precipitated by President Grant’s insistence that matters of religion should be left “to the family altar, the church, and the private school, supported entirely by private contributions.” 44 There was ample precedent, too, for Theodore Roosevelt’s declaration that in the interest of “absolutely nonsectarian public schools” it was “not our business to have the Protestant Bible or the Catholic Vulgate or the Talmud read in those schools.” 45 The same principle appeared in the message of an Ohio Governor who vetoed a compulsory Bible-reading bill in 1925:

“It is my belief that religious teaching in our homes, Sunday schools, churches, by the good [374 U.S. 203, 274] mothers, fathers, and ministers of Ohio is far preferable to compulsory teaching of religion by the state. The spirit of our federal and state constitutions from the beginning . . . [has] been to leave religious instruction to the discretion of parents.”

This case shows that dissent from people like Dr. Ellery Schempp in the 1960’s and Jessica Ahlquist last year, helps all of us, believer or non-believer. One person can make a difference. The struggle will be hard and there won’t be any unicorns and rainbows but it is something we all need to do together so we can all enjoy the benefits of citizenship.

*Side Note* This decision also included the case Murray et al. v. Curlett et al.(1963). The court’s decision ended mandatory prayer in public schools. The plantiff in the case was Madalyn Murray O’Hair who would establish American Atheists in 1963. So happy 50th Birthday to American Atheists

This blog transitioned to a podcast in April 2020.

Listen to our podcast for free HERE or on your favorite podcast app.

Founder, editor and host of Secular Left - please be gentle For media inquiries see our "About" page.