It doesn’t take much research or ‘soul searching’ to know that any Supreme Court nominee by President Trump would NOT be friendly to issues of concern to secular people. You don’t even need to do any Internet searching because the major freethought groups already have the goods on Neil Gorsuch. Obviously, any ‘little Scalia’ is no friend of ours.

Justice Antonin Scalia Is Consistent, He Still Doesn’t Know What Separation Of Church And State Means 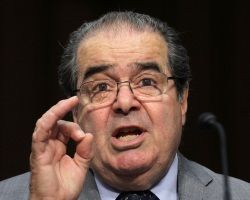 About once a year or so, Justice Antonin Scalia gets in front of a Catholic school assembly and tells the students that there is no constitutional tradition that says the state must be neutral on religion or free of religion. At least he is consistent. He is consistently wrong about separation of church and state.

Marriage Has Been Redefined Before

One of the conservative talking points in opposition to same-sex marriage is that the courts shouldn’t redefine marriage. They claim it has always been between a man and a woman. The problem is marriage has been redefined before, several times. A recent redefinition even contradicts some religious conservative beliefs.

Is Justice Scalia Warming To Separation Of Church And State?

Justice Antonin Scalia, one of the members of the conservative block on the United States Supreme Court, gave a speech Wednesday where he seemed to be supporting the separation of church and state. Which is odd because he has been one of the justices who wants to limit the scope of the 1st amendment so narrowly that it really means nothing. Is Justice Scalia warming to separation of church and state?

In a 5-4 decision on Monday, the US Supreme Court said that the Town of Greece New York could open their town council meetings with a religious prayer. The majority on the court held that legislative prayers were not unconstitutional because they were traditional acts performed at government meetings. We’ve seen this argument before, it has been called Ceremonial Deism and it means a civic religion divorced of any specific religious meaning. I would think that Christians would be very upset that the court considers their religion ‘generic’. Just because Ceremonial Deism has been a tradition doesn’t mean it isn’t harmful.

One argument the court used to rule in favor of the Town of Greece was the old argument from tradition:

If Hobby Lobby Wins, Corporations Will Be Able To Tell Your Doctor What To Say

The Hobby Lobby religious exemption to covering contraception case will be heard in the US Supreme Court starting on Tuesday. If corporations are given a right to religious freedom there is no telling how bad this will be for people. One bad result, that hasn’t been reported on by the media, is that both plaintiffs want to prevent Doctors from even talking about contraceptives to their employees. These corporations want to get between you and your doctor.