Pope Francis Leaves Out Seculars In Speech About Religious Freedom

Popepalooza hit Philadelphia on Saturday and Pope Francis gave a speech in front of iconic Independence Hall, where the Declaration of Independence and the U.S. Constitution were both signed. The topic was religious freedom. I was interested to hear what he had to say about it.

Rowan County (KY) Clerk Kim Davis was jailed on Thursday 9/3 after being found in contempt of court for refusing to issue marriage licenses to same-sex couples in her county. She previously lost all of her appeals including a last ditch effort to have the US Supreme Court issue a stay. Of course reaction by the religious right is apocalyptic. The reality is Davis was jailed for not following the law – not for her religious beliefs.

From the Friendly Atheist: 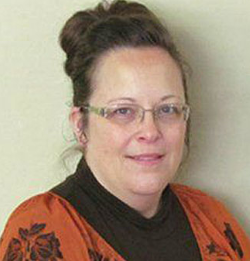 The 28 page decision is full of delicious statements and rebuttals against Kim Davis’ lame arguments against doing her sworn duty. Here are some highlights:

This week, the Obama administration took the first positive steps to reform faith-based initiatives within the government. These initial reforms go a long way to protecting the wall of separation between church and state and protecting the religious freedoms of the faith-based groups and the beneficiaries who use the services. I am hoping more reform is coming.

Finally, The ACLU Turns Against The RFRA

During the recent firestorm over state Religious Freedom Restoration Acts (RFRA) like those passed by Indiana and the use of them to discriminate against LGBT people, one of my conservative friends pointed out many liberals and the ACLU supported the federal RFRA passed in 1993. He implied they were being hypocrites. Late last week the ACLU formally repudiated its support of the RFRA.

The ACLU provided some of the same reasons to remove their support of the RFRA that has been mentioned in previous posts about this issue: