Ohio House of Represenatives in session. Photo by Joshua Rothaas Used with permission.

In Ohio, Substitute HB 425, also known as the Ohio Student Religious Liberties Act seems to codify rights in state law that public school students currently enjoy from the 1st amendment of the US Constitution and that have been affirmed through various court cases over the years. Why would a GOP majority seem to want to protect religious freedom for students? To give cover to discriminate and bully LGBT students of course.

A majority of the HB 425 just rehashes current legal precedents covering religious freedom in the public schools. As the Columbus Dispatch put it:

On Wednesday (2/3/2016), President Obama visited a mosque for the first time while in office. I applaud his visit and his remarks against bigotry toward Muslims, but when he talked about religious freedom, people who don’t subscribe to any religion seemed not to be included.

According To Ben Carson, Ben Carson Can’t Be President 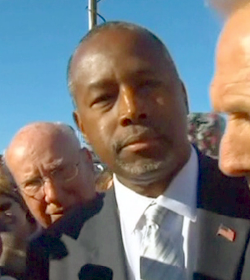 Dr. Ben Carson, who is running for the GOP nomination for President in 2016, stopped in my hometown for a visit on Wednesday. WTOL in Toledo had video and a reporter on the scene and she asked about his recent comments about Muslims. He didn’t back down and in fact according to Ben Carson, Ben Carson can’t be President.

Today is Constitution Day. This is when we celebrate the date, back in 1787, when delegates to the Constitutional Convention signed the document in Philadelphia. Our Constitution is currently under attack by conservatives who really believe religion should trump the document of democracy and equality. We need to let our members of Congress know that this is a wrong move.

Back in June the so-called “First Amendment Defense Act” was introduced:

Southern Baptists Write A Book On How To Subvert The Law

A committee of the Southern Baptist Convention has published a pamphlet teaching members how to subvert civil laws against discrimination. The main idea is to pretend all church employees are ministers so they can use the ministerial exemption.

Friendly Atheist has the info on the pamphlet:

Marriage Has Been Redefined Before

One of the conservative talking points in opposition to same-sex marriage is that the courts shouldn’t redefine marriage. They claim it has always been between a man and a woman. The problem is marriage has been redefined before, several times. A recent redefinition even contradicts some religious conservative beliefs.