Last month, the Freedom From Religion Foundation (FFRF) sent a letter of complaint to Ohio State Senator Richard H. Finan over the selected design of the Holocaust memorial that will be built on the grounds of the Ohio State House in downtown Columbus. The design, by Daniel Libeskind, features a large representation of the Star of David, a symbol of the Jewish religion. FFRF rightly points out that the Star of David is a religious symbol and Jews weren’t the only victims of the Holocaust. They are asking for a more inclusive design. There will be a public hearing on July 18th and FFRF is asking for as many secular supporters as possible to show up at the meeting to give voice to their concern. It seems that Senator Finan might be thinking the same thing about the design.

The design selected for the memorial was created by Daniel Libeskind. Libeskind’s design incorporates two rectangular structures made of stainless steel with the story of an Auschwitz survivor embossed upon them. In the negative space between the two structures is a very large sacred religious symbol known as the “Star of David” which dominates the structure, even from a long distance. FFRF believes with the state of Ohio it is important to memorialize the Holocaust. We also believe that the solemnity and import of the task can be accomplished without permanently placing a religious symbol on government property. As the Star of David was deemed by European Jews to be the symbol that “would represent Judaism just as the cross did Christianity,” its prominent inclusion in the memorial gives the impression of an endorsement of Judaism

The monument could resemble numerous powerful war memorials across the U5. Which do not use any sectarian images: including the National World War II Memorial, the Vietnam Veterans Memorial and the Korean War Veterans Memorial. Each is secular in nature and Without religious reference, which offends no one and is respected by all. The lack of religious imagery within those memorial designs neither diminishes their significance nor detracts from the respect and honor shown for the victims of those conflicts.

FFRF has a point. You can create a memorial that doesn’t seem to show favoritism or endorsement of a religion. I hope that the powers that be will ask the design to be changed to reduce the focus on the Star of David or remove it completely.

There will be a public hearing Thursday morning, July 18, at 10:00 am at the Ohio State Capitol (State Room 108) about the memorial. FFRF is requesting as many supporters as possible to show up and voice concern over the design of the memorial.

When I hear about what happened at the hearing, I’ll update this post.

Here is an image of the model of the memorial to show the relative scale: 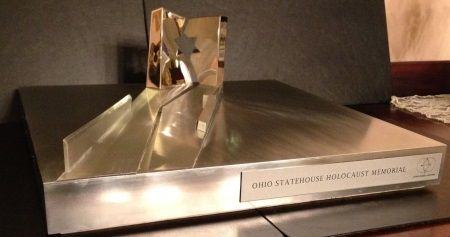 The Capitol Square Review and Advisory Board voted 8 to 1 to approve the Holocaust memorial as designed. Former state senator Richard H. Finan had a shabby mock up installed to show the actual size of the memorial. In an ironic twist, the mock up drew complaints and the Star of David was painted over. Yet, the actual memorial was approved.

Comments for this post are closed. If you still wish to send a note to the editor, visit our contact form

I wrote a Book

Secular Left by Douglas Berger is licensed under a Creative Commons Attribution-NonCommercial-NoDerivs 3.0 United States License.
Based on a work at www.secularleft.us.
Permissions beyond the scope of this license may be available at https://www.secularleft.us/contact-us.